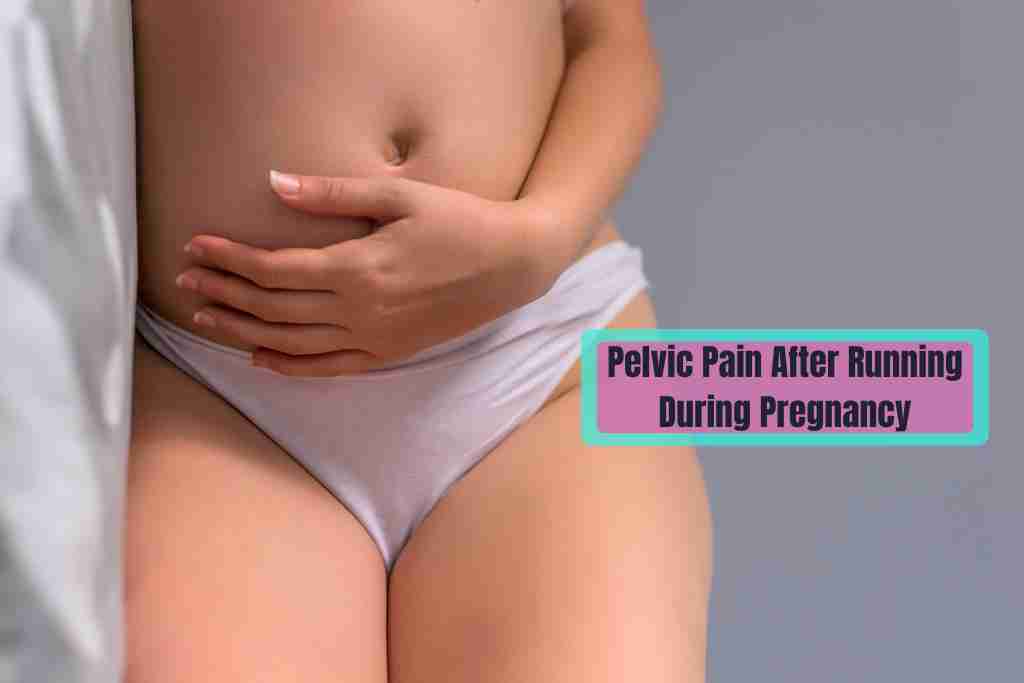 If running is part of your regular routine and you are worried about having to give it up if you get pregnant, you may not have to worry–running is safe for most women, though your running routine will have to change as your body changes.

This doesn’t mean you need to give up your running routine–though you should always call your doctor immediately if you are experiencing pain you are worried about. Physical activity is good for pregnant women, and leads to many beneficial outcomes for mom and baby.

What are the Common Causes of Pelvic Pain After Running During Pregnancy?

Hormonal changes in pregnancy may be responsible for pelvic discomfort during running. During pregnancy the body releases a hormone called Relaxin, which (as the name suggests) makes your ligaments looser and more flexible, which helps your body adapt to pregnancy and also makes delivery easier.

The downside of Relaxin is that your body will have to adjust to looser ligaments–which might cause discomfort during running or other exercise.

Your growing uterus puts strain on the pelvis, including putting stress on pelvic muscles and ligaments. This strain can result in lower back pain, or even pain in the hips or groin. You may notice this pain more during running, or in later weeks of your pregnancy you might experience this pain even when not exercising.

You may have pain in the joint at the very front of your pelvis, called the symphysis pubis. This can start even at the beginning of pregnancy as hormones loosen the joint. A support belt may alleviate this pain.

The round ligament connects your uterus to your groin, and it gets strained during pregnancy, causing pain in your side during movement. If you experience this pain, try lying down on the side of the pain for a few moments and letting the ligament rest. This pain often goes away by the third trimester.

This condition occurs when your abdominal muscles separate slightly due to the expansion of your uterus. You may notice this during or after pregnancy. If it doesn’t resolve postpartum, a doctor or physical therapist can recommend strengthening exercises.

Common Treatments for Pelvic Pain After Running During Pregnancy

While some women might notice more pain during running and exercise as their body adjusts, many women also find that moderate exercise is the best way to avoid or alleviate pelvic pain and the other aches associated with pregnancy.

It’s a good idea to chat with your doctor about what treatments might be best, but here are some common ways to treat pelvic pain during running:

Is it Normal to Have Pelvic Pain After Running when Pregnant?

Discuss it with your doctor if the pain gets worse or gets in the way of your running or exercise routine (movement can be important to avoid even more pregnancy-related discomfort!).

Keep in mind that your body will also have to adjust post-partum, so pelvic pain might not disappear immediately after giving birth. You will still need to take it easy, and every day might be different–just like during your pregnancy.

Can Running Cause Placental Abruption?

Placental abruption is a condition where the implanted placenta partially or completely separates from the uterus, causing pain and/or bleeding. It has been suggested that heavy exercise might contribute to this outcome, though studies are inconclusive as to whether exercise is a direct cause of placental abruption.

You should speak with your doctor if you are concerned about the risk of placental abruption and running.

When should you stop running during pregnancy?

When it comes to pregnant women, the question of when should you stop running during pregnancy can be a difficult one to answer. Running during pregnancy has been shown to provide numerous benefits, including improved cardiovascular fitness and muscle strength, as well as greater endurance and overall energy levels. However, there are certain times when running may not be the best choice. It is important for pregnant women to understand their own body and listen to their doctor’s advice in order to determine what is safe and healthy for them.

In general, most doctors recommend that pregnant women avoid running after the first trimester of pregnancy. This is because the baby’s body begins developing rapidly at this stage, making it more vulnerable to any potential trauma from running or other strenuous activities.

Pelvic pain after running during pregnancy is a common complaint among pregnant women. While it can be difficult to cope with, there are treatments available for this condition. It’s important for expectant mothers to understand the causes of pelvic pain and what kind of treatment options are available for them.

When running during pregnancy, the growing baby can put additional pressure on the pelvis and cause pelvic pain. The hormone relaxin is also released during pregnancy which makes the ligaments in the body looser, including those that attach to the pelvis. This increases pressure on the sacroiliac joint which can lead to discomfort while exercising or performing everyday activities such as walking or climbing stairs. In addition, high levels of progesterone in expectant mothers cause their joints to become more flexible and relaxed, making them prone to injury when exercising too vigorously or without proper support.