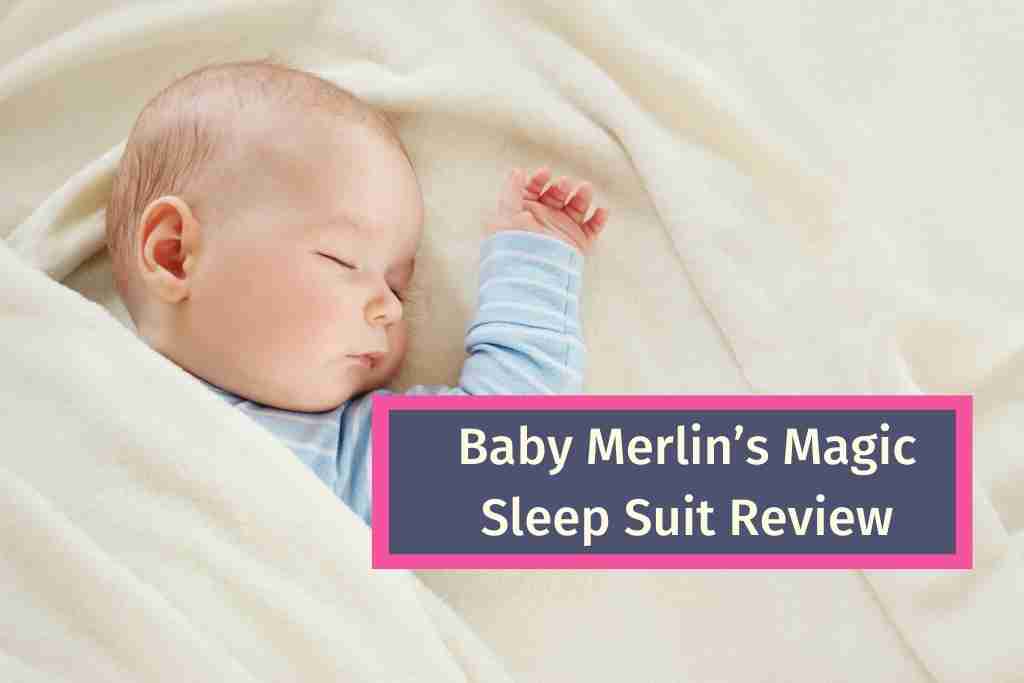 Now that we find ourselves in sleepland again—after our brief estrangement—I thought I’d share my analysis of Baby Merlin ‘s Magic Sleep Suit!

It’s been approximately a week since this incredible item first came into our lives, and numerous people have been asking me about it on Twitter, so I decided to answer some of those questions here. Let’s get started!

Ollie’s sleep has just basically been completely unpredictable since he was around 11 weeks olds.

We do not know just when he would wake in the night, how many times, how random his times were, and what times he would wake up, how tiring and hopeless things became, and what was developing into utterly unpredictable and more extreme sleeping pattern.

Then I discovered the Magic sleep suit and thought that we had nothing to loose.

So How Is Ollie Sleeping Now?

So, we were so desperately in need of more than 1.5 hour increments of sleep that we one-day Amazon Prime’d a Merlin’s Magic Sleep Suit last Saturday. After three solid days of not sleeping a whole-handful of hours, and almost two months of no regularity, we were looking to try anything. I’d heard a lot of good feedback about these sleep suits, and just thought they looked hilarious. But, don’t knock it until you’ve tried it! So we gave them a shot.

What Is Your Routine With Ollie Now That You’re Using The Suit?

We try to preserve this schedule in our house, modeled on the Ollie’s nursing schedule. After work, we typically nurse him around 5 or 5:30 pm; dinner time around 6 or 6:30 pm; Ollie has been getting rice cereal while we feed ourselves, his bath around 7:30 pm, his nursing at 8 pm, and he goes down at 8:00 pm in the crib in our room.

He pretty much nurses himself to sleep every night, and after he’s asleep I simply carry him to our bedroom, put him in his sleeping suit (and he’s usually sound asleep and never wakes up), then lay him down.

What Does He Wear In The Suit?

I’ve just been putting him in his usual pajamas. Not fleece ones, of course. The suit itself is pretty thick, and micro-fleece, so I think fleece pajamas would be too hot. The middle layer, however, is pretty much breathable mesh, so it doesn’t seem as warm as it looks.

Ollie likes to have his face on something soft, so he lays directly on the really soft blanket, nestled between the crib sheets. Someone asked if he was hot while sleeping in his sleep suit on top of that blanket, but I have not noticed him getting warm so far. I also still cover him from the knees down with a very light blanket some nights, but he still doesn’t seem to need it.

I know, from birth, that I’ve simply done that and continue to do it. But once we unzip him and change him, his body has never felt hot, overheated, or sweaty. We keep our home between 67° and 68° at night, and when we awake him in the morning or in the middle of the night, his hands are always like ice. I haven t figured out how to keep his hands from freezing now that they’re not in a swaddle, but it doesn’t bother him!

It resembles a stiff-ish thick body suit, which keeps him in place so he doesn’t wake up from his startle reflex. There are two zippers on the front which allows for diaper changes and makes it simple to pull their legs out.

I was concerned that it would be more like a hassle than anything else, but it could be much simpler than other sleep contraptions. I m not exaggerating when I say that as soon as I put my son in it to go to sleep, he woke up for a second then literally permeated back into the crib and fell asleep rapidly.

Which One Did You Order?

B is approximately 17 pounds, so we opted for the 6-9 month option, which is made for 18 to 21 pounds. The smaller one is 3-6 months and 12 to 18 pounds. I knew it would be outgrown rather quickly and I’m glad we went with the 6-9 month option, as it was a perfect fit. It’s been worth every penny thus far. A good splurge, without a doubt.

So Is The Merlin’s Magic Sleep Suit A Win?

I’d say yes. As soon as I put him in it after his bedtime feeding, he s passed out cold. It’s thick and soft and he can barely move around in it so he is just warm and comfortable, and can’t startle himself awake as easily.

Ollie has always been a good sleeper, so it has been easy to swaddle him. But, he now appears to be ready to move from back to belly, and he is showing a tendency to favor sleep with his arms free.

However, he also enjoys his pacifier, but he would consistently startle himself and knock his pacifier out, resulting in more crying. And even if he managed to get his arms out without knocking them, I doubt he felt comfortable enough to fall asleep.

He napped for about an hour or so during the day with his arms and legs untucked, but bedtime had not yet happened effectively. Enter, the magical wizard suit. It’s been performing well for us so far, and I would recommend it. I do not know how long we’ll use it for, but it’s already helped us break the swaddle and ease into sleeping with just a sleeping bag, and hopefully soon no sleeping aid at all.

At the moment, we’re having more sleep than usual, and I’m counting that as a win. I’m eager to get him sleeping better, so we can move him back up to his crib earlier, rather than later. But, I mean, it’s so sweet having him so near me! It makes me upset every time we put him upstairs, ha!

Can He Roll Over In The Suit?

I have not yet seen Ollie yet fully roll from his back to his stomach, so I believe that it will still take quite some time before he can do it in the suit. I’ve heard that babies can properly roll to their sides once they get older, but I really don’t know for sure, so we’re not there yet.

This suit has been a godsend, the whole family is sleeping better and we have the Merlin’s Magic Sleep Suit to thank for that. I would whole heartedly recommend it.

I’ll report back to you if anything changes. And as I said earlier, I don’t know how long we’ll use it for, but for the time being it has become just another part of our nightly routine and it seems to be working. If you are a mama desperate for sleep, it might also work for you!